Mayor Thomas Henry of Fort Wayne, Indiana, has issued a proclamation officially recognizing October as Employee Ownership Month. In it, he calls employee ownership "instrumental in helping Americans share in our nation's growth and prosperity by enabling citizens to accumulate wealth in the businesses where they are employed." About ESOPs he is even more specific, referencing not only the oft-quoted national numbers of ESOPs, participants, and assets, but including the Fort Wayne ESOP community, comprised of "10 ESOP companies with 1,785 total participants and approximately $96.4 million in total assets." He says further that "ESOP businesses are more profitable and productive, last longer in the marketplace and lay off fewer workers during downturns."

Richard Van Doel of the Indiana Center for Employee Ownership as well as Ron Turpin and Tim Leman, the CFO and CEO respectively of Gibson Insurance, advocated for the proclamation to the mayor's office. 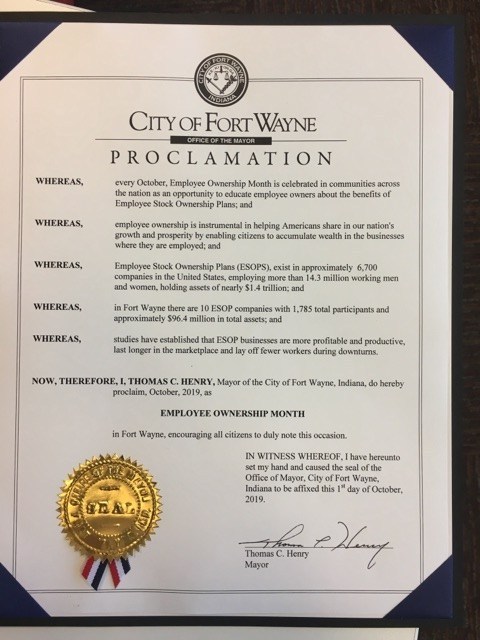