On October 15, the NCEO released a new publication, A Guide to DOL ESOP Investigations, that provides the first comprehensive and quantitative analysis of the Department of Labor’s ESOP investigations. The publication contains a report on data obtained from the DOL covering all ESOP investigations between fiscal year 2007 and 2017, breaking investigations down by the issue involved and the results, as well as articles and commentary helping readers to understand how best to handle the risk of a DOL investigation.

ESOP investigations are carried out by the Employee Benefits Security Administration (EBSA), the agency within DOL responsible for the enforcement of Title I of the Employee Retirement Income Security Act of 1974 (ERISA) which created the modern-day framework for ESOPs. The data shows that EBSA closed 2,069 civil ESOP investigations between fiscal year 2007 and 2017 and found ERISA violations in 1,237 of these cases (60%). We estimate that between 20% and 25% of all ESOPs were the subject of an investigation over this period.

The NCEO matched each case record to a Form 5500 filing for the plan being investigated, where possible, allowing the analysis to include characteristics such as the number of plan participants, S versus C corporation status, leveraged versus non-leveraged plans, and more.

The most common reason (“lead issue”) EBSA cited for opening an investigation were potential ERISA violations in the loan terms and/or the ESOP valuation. Valuation cases were responsible for the majority of monetary recoveries, and have been rising in number of time, as seen in the below chart. 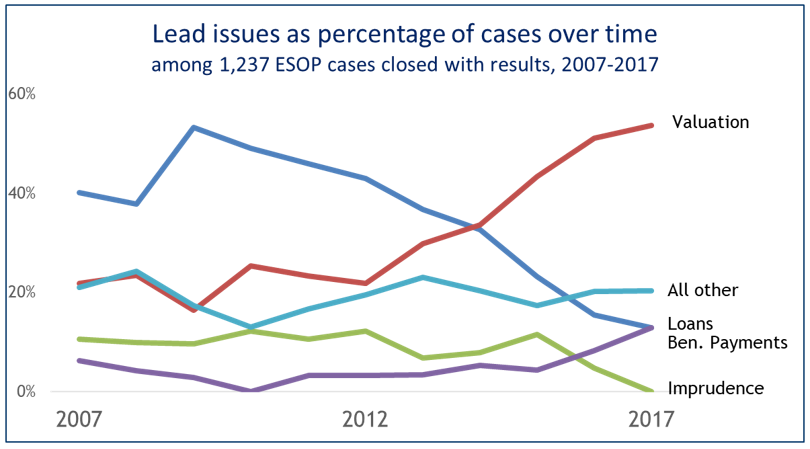 The number of ESOP cases closed has been declining: EBSA closed 150 civil ESOP cases with results in 2007 and 54 in 2017. This decline has tracked with an overall decline in EBSA’s civil investigations: ESOP investigations have consistently made up approximately 5% of all of EBSA’s civil caseload.

This data shows that the risk of an investigation is real but manageable, that most investigations conclude without a direct monetary result, and that valuation and loans are by far the most common areas of focus. ESOP trustees and appraisers should be aware of the DOL’s areas of concern, and should follow the guidance laid out in the several process agreements that certain trustees have entered into with the DOL. The publication includes descriptions of typical DOL processes for opening and conducting investigations, and provides suggestions for effectively preventing and responding to an investigation.

The publication, A Guide to DOL ESOP Investigations, is available at this link. NCEO members can view a summary of the findings at this link (PDF).

The NCEO Is Hiring! We Posted a Job for Our First-Ever Controller

NCEO Board Election Closes on January 17