The NCEO has just completed the first phase of a long-term project to gather data that will help us develop strategies to increase the reach of employee ownership. Everyone in the ESOP community has heard common themes from business owners trying to decide who should own their companies after they retire, but the field has lacked research testing different messages, prioritizing the various channels through which business owners can be reached, or determining what life events trigger the decision to begin exploring a sale.

The NCEO developed a questionnaire for business owners, and over the past 18 months we’ve had 43 respondents fill it out. We now have enough data to refine the questionnaire so we can look toward the expensive but necessary work of gathering a usable database on the people who consider selling to employees and how best to influence their decision-making process. At this point our data is preliminary, but it has already revealed some interesting patterns.

What Draws Business Owners to the Idea of an ESOP?

In terms of messaging, we asked business owners an open-ended question about what aspect of ESOPs was the primary thing that attracted them. Not surprisingly, some of them mentioned more than one idea, and all of them had their own way of framing their answers. Nonetheless, three primary themes dominate the responses. As the chart below shows, the most common themes are, in order, the economic well-being of employees, securing a comfortable retirement for the owner, and preserving the legacy and values of the organization. 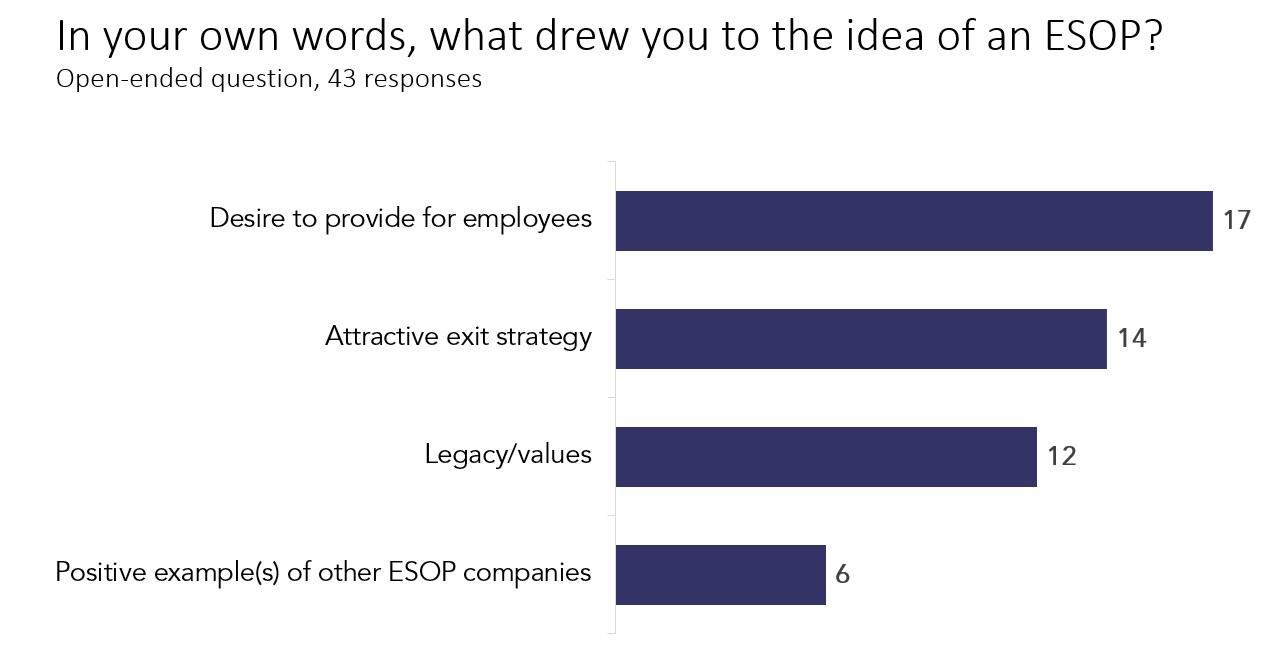 A few things stand out.

First, although a desire to provide for employees is the most common theme, within that theme, some phrased economic well-being in a positive way (“cutting long-term employees in on long-term wealth creation”) and some in a protective way, such as by providing “security” or avoiding layoffs.

Second, “legacy / values” is diverse, with respondents talking about everything from community and values to teamwork to an aversion to private equity.

And third, at least among these respondents, the amount of overlap between the three primary themes is relatively small. People tended to stick with just one of the themes.

The questionnaire covered many other topics. Not surprisingly, the top three concerns about ESOPs in order are ongoing costs, setup costs, and complexity. That reflects comments we have heard again and again from prospective sellers: that professionals tend to emphasize their expertise by demonstrating their knowledge of the intricacies of ESOPs. In the process, they often skip over what’s simple. We are providing resources for such prospective sellers. In our booklet Who Should Own Your Business After You? and our new resource ESOP Essentials, we lead with the simple core of the ESOP idea.

NCEO members can see a ten-slide PowerPoint summary of our research results, covering many of the other issues the survey addressed, such as what triggered them to start planning their exit, whose advice they rely on, how they first heard about an ESOP, and how they rank different factors, from preserving management to the total after-tax payment.

The NCEO Launches the ESOP Finance Toolkit and Lender directory