New data from the Department of Labor shows 6,482 ESOPs operating in the U.S., covering 13.9 million participants. The number of unique companies with an ESOP is 6,257 (a company may sponsor multiple plans).

These numbers are current as of the end of 2019, the most recent year for which year-to-year comparable data is available.

(Why the delay? The DOL’s data is sourced from Form 5500 employee benefit plan filings, which are due seven months after the end of each plan year, or nine and a half months if an extension is requested. The DOL takes up to a year to process and clean the data once received, and the NCEO conducts several weeks of further work on the DOL data to identify publicly traded companies, percentage ESOP ownership, and other information. Following this process ensures that we are comparing apples to apples in our yearly updates and over-time analyses.)

Participants continue to increase among ESOPs at privately held companies. The number of participants in private ESOPs increased 5.7% from 2014 to 2019 even as the number of plans decreased 1.2% over the same period. 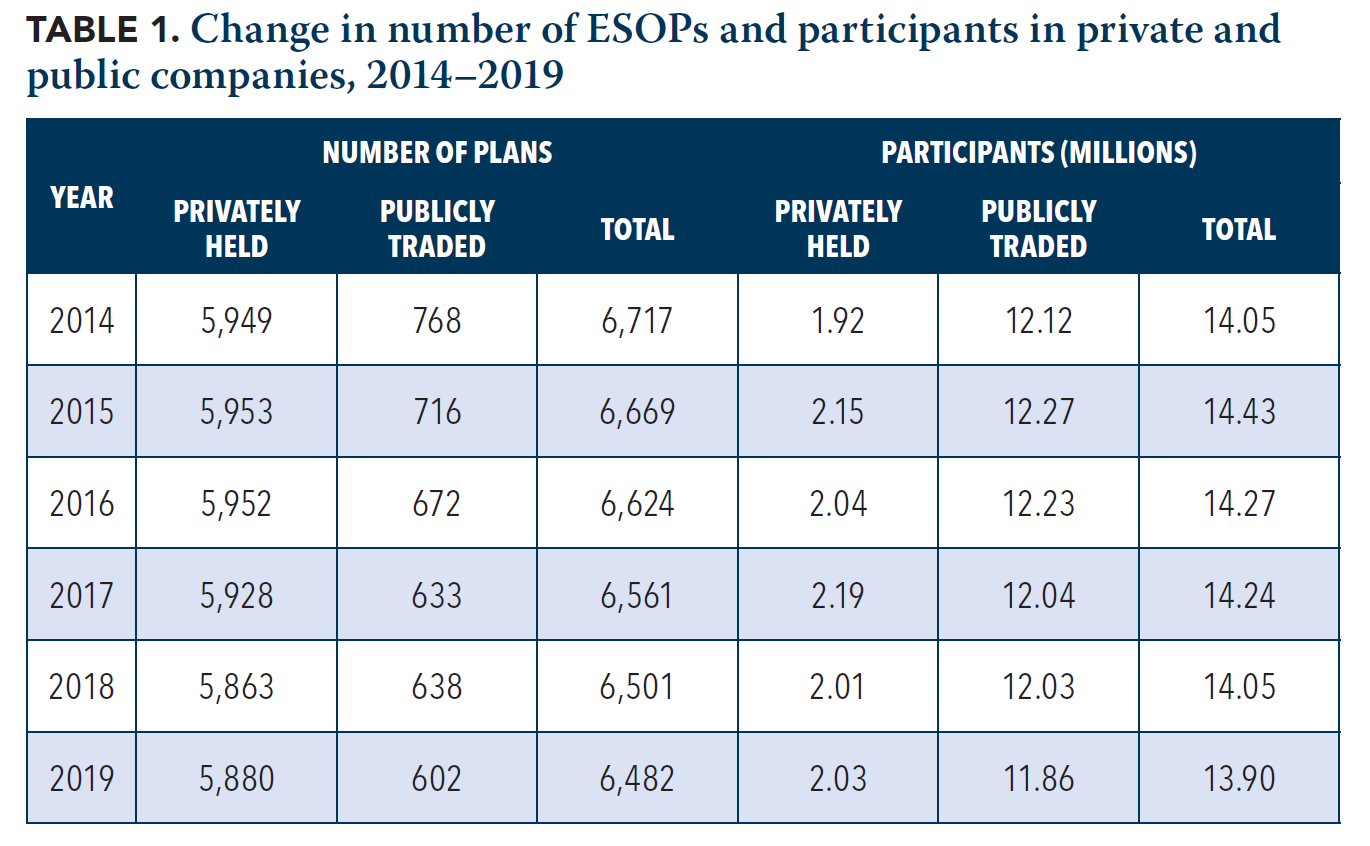 New ESOP creation remains steady. While new ESOPs are not outpacing the number of terminating plans, the number of newly established plans each year continues to hover around 250; new privately held ESOPs totaled 229 in 2019 and 226 in 2014.

The decline in ESOPs does not appear to be concentrated among particular types of companies. The industry makeup of ESOPs has not shifted significantly over the past few years. Construction companies increased from 12% to 15% of privately held ESOPs from 2014 to 2019, the largest shift in any industry, while the share of finance/insurance/real estate and manufacturing companies each decreased by one percentage point.

There has been a modest uptick in the size of typical ESOPs since 2014. The median privately held ESOP had 57 active participants (current employees) in 2019 compared to 50 in 2014. Thirty-three percent of private ESOPs had more than 100 active participants in 2019, up from 29% in 2014.

We will be further exploring these trends in future newsletter pieces. See our Employee Ownership by the Numbers webpage for a detailed look at the most recent ESOP data. For thoughts on what these trends mean, see the separate article “Making Sense of ESOP Trends” in this newsletter.